Sakhir: He moved away from his opponent at the Mill Country Stakes in Newbury

Roger Farian didn’t give up much, but the pride he took in winning seven winners by an aggregate margin of 34838-1 in three meetings was impossible to miss, and the show’s headline was the shimmering Sakhr at Mill Reef.

The Dubai Duty Free Group 2 sponsored could do with another superstar production and Varian feels he has one of those on his hands at the Zovani event, which was very good relative to his competitors.

This was also the case in Section 1 of the Novice 7f, who went to his teammate out of the Solar, while a splurgeon won the Group 3 race for the card. Dusky Lord (Ayre), Royal Champion (Ayre), El Hassan (Newmarket) and Aymeric (Ayre) were other winners in the sweltering arena of 12 runners a day. 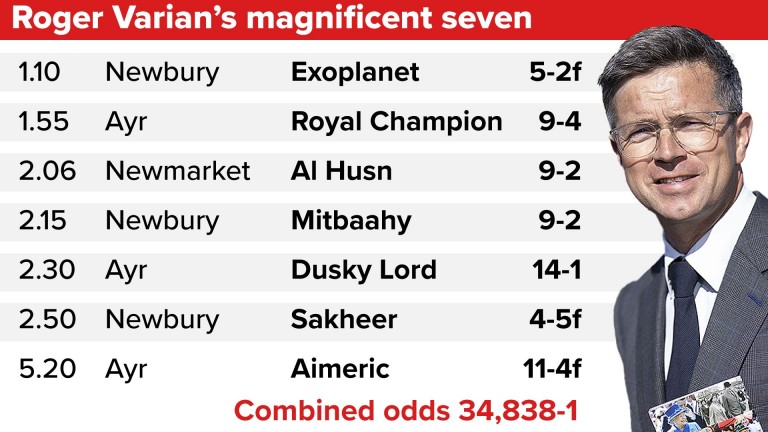 Racing in the same silk as KHK Racing Ltd’s recent St Leger winner Eldar Eldaroff, Sakhir was described as a “proper horse” by groom Saeed Ahmed and there was weight to those words after a smooth win under David Egan.

The promising colt is as short as 7-1 for next year’s Qipco 2000 Genies, although Paddy Power and Betfair are twice that price.

“We’re having a good day, but it’s not always like that,” said Farian, who was once a jump jockey but is now a top Newmarket coach.

“I’m happy and you never expect it to go like this, but we ran some great horses. There are big fields and the racing is competitive, but everything clicks and it doesn’t usually happen like that.

“The horses are looking great and the team is doing a great job at home. We have some great horses and great owners, so we have a lot of support, and when you get that, every once in a while such a day is possible.”

Turning his attention to Sakhir, Farian, whose Charen finished third at Mill Reef, added: “He looks good, doesn’t he? He’s always done well and I thought he’d go to Windsor and win the first time, so skilled [Magical Sunset] Whoever beat him must have done well, even though he was a bit green. He won well at Haydock, but you never know getting into those group races, which is different from beating the beginner field.

“What can I say, he looks good. Middle Park is only next week, so let’s not judge anything in or out. He has size and range so looks like a horse he’s going to train on. He’s very exciting and he’s won over six furloughs, but I I think it will stay seven gallons and maybe a mile.

“He relaxes really well and hasn’t stopped at the line. We’re going to enjoy it and it’s hard to imagine if I’d have a better two-year-old, even though we have some nice people.”

“I will keep riding that peak of the wave and keep taking every opportunity,” he said. “It was a great day and I hope there will be more of them in the future.

“I knew I had a good game book, but Sakhir was the main book – I was quietly confident that it could be something special and it might be.”

Egan added in detail: “He’s always happy with his job and full of energy at home. It’s good to see him getting better with every start. He was so green on his debut and took a big step forward to win Haydock last time which is similar to another step today.

“The way he got to the line, I think he could get seven gallons for sure. I got him in a nice rhythm and the race went smoothly. The world is his oyster.”

Subscribe to receive on the nose, our essential daily newsletter, from Racing Post. Your unmissable morning feed, straight to your email inbox every morning.